The Canadian Organization of the Blind and DeafBlind 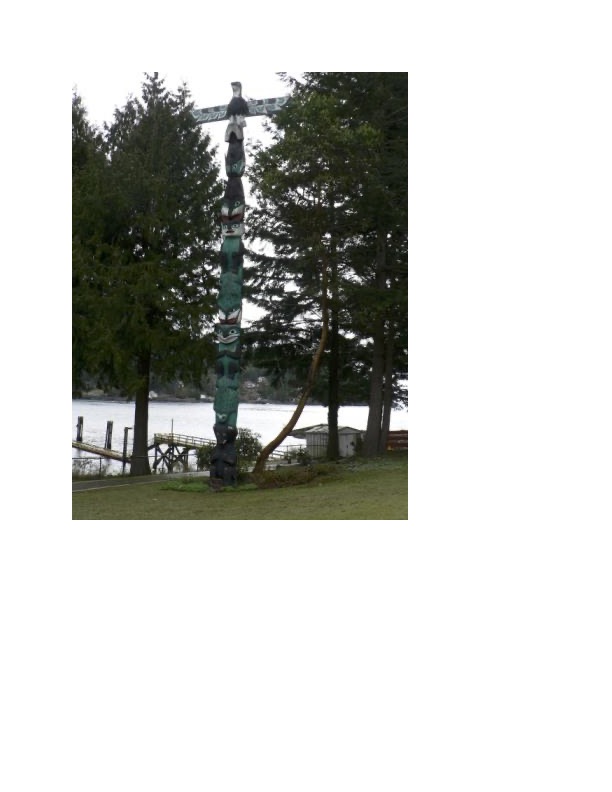 Camp Bowen is situated on Bowen Island or Xwlíl’xhwm, part of the traditional land of the Squamish (Sḵwx̱wú7mesh) Nation. According to BowenHeritage.org, “the name Xwlíl’xhwm means “‘Fast Drumming Ground’. Some authors attribute the name to the sound made by the ocean as it passes through the tiny pass between the Island’s northern point and Finisterre Island.”

We acknowledge with gratitude that we live, work, and play on Xwlíl’xhwm. Although this has been our home for more than half a century, it has been part of the lands of the Squamish for time immemorial.

There is a Totem Pole that has served as a gathering place for Camp Bowen campers for decades but, being curious, we wanted to learn more about its history. Read on for our findings. If you know more about this pole, please let us know.

Originally carved in 1926 by a member of the Sechelt Band, from a cedar tree estimated to be 500 years old, the pole was commissioned by the Union Steamship Company and stood in front of their offices in Bowen Village until 1961, when they offered it as a welcoming gift to the summer camp and blindness training centre that Camp Bowen has called home for many years, while it was still being developed.

It is a typical Salish pole, as per the three colours used – red, black and green. The black paint was made from a plant called devil’s club, which is a First Nations medicine plant; the red from a sacred mountain called “tumuth’; the green from the top of the devil’s club, which is the plant part of it. Deer marrow was mixed into the paint.

It is a spiritual pole. The story it tells is of the powers that the Sechelt related to these spirits; when they sang a song and danced to them. The white spots on the pole are eyes, representing access to the spirit world. They protect the dances, when they enter the spirit world, because they can see the evil spirits.

With financial assistance from the BC Ministry of Tourism and Culture, the pole was restored in 1992. Master Carver, Stan Joseph of the Garibaldi Estates in Squamish, BC was commissioned to do the work. At the time, Mr. Joseph had been restoring Pacific North West totem poles in Canada, Japan, Germany and England for 16 years. BC Hydro supplied a crane to hoist the pole out of the ground and lay it out flat.

The pole was stripped of paint and loose wood. Wings were made for the eagle from 1’ x 12” strips of laminated red cedar. The cracks and holes in the pole were filled with cold cure and then it was sanded and painted. A special metal insert was made for the base of the pole to protect it from the earth and a metal brace was attached to the back of the pole for stability.

When the pole was ready to stand upright again, a public dedication ceremony was held. It was attended by the local MLA for Victoria and the Local MP for Ottawa as well as the Bowen Island Community Heritage Committee.

“Reading” the pole from the top-down:

As we celebrate National Indigenous People’s Day, it is a reminder of how much we have still to learn about the First Nations peoples that surround us and on who’s lands we live, work, and play.