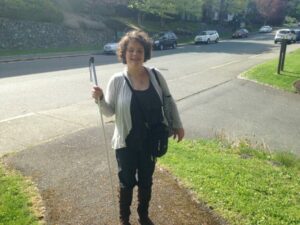 When you think of the word blind it is likely that you either picture someone with a white cane or perhaps a guide dog. But the idea of your average blind person walking around independently is newer than most people realize and so too is the concept of the white cane.

White canes were originally introduced in Europe in the 1930’s and spread to North America. Lions Club International, who championed the idea of a device that would alert motorists and other members of the public to the fact that a blind person was indeed blind, began distributing short canes that were painted white. Such canes were not specifically designed to be used for a blind person’s independent travel, but rather as a simple means of blindness identification. It wasn’t until World War II that a longer cane designed to allow blinded war veterans to move around more independently was invented in the United States. Commonly constructed of aluminum and more recently graphite, the cane developed at this time is very like the canes most Canadians who are blind or Deafblind use today, with the one major difference being that folding and telescoping canes have been developed to aid in storage and transportation of the cane when not in use.

The canes favoured by many of the staff at both the Camp Bowen Society and the Pacific Training Centre for the Blind are a more recent invention. They are longer and lighter than traditional Canadian canes, allowing for less wrist strain and greater object detection. Originally called the “Iowa Cane”, the cane now often called the NFB cane was introduced by Kenneth Jernigan, who was then the director of the then called Iowa Commission for the Blind, now the National Federation of the Blind (NFB). It is a cane similar to Dr. Jernigan’s long, fibreglass cane with a green plastic grip and metal tip that you will often see our students using during training and post-graduation, though folding and telescoping varieties of the NFB cane have more recently hit the market.

Prior to the 1960’s and the establishment of National White Cane Safety Day, as White Cane Day is known in the United States, blind Americans involved in accidents could be charged with contributory negligence. This is because the simple act of walking unescorted in public was considered to be a case of the blind person risking their safety and that of those around them. It was former United States President, Lyndon B. Johnson, who declared October 15 as White Cane Safety Day in 1964to honour the achievements of blind and visually impaired people and to educate the American public about the white cane. During his speech proclaiming White Cane Safety Day, President Johnson said, “A white cane in our society has become one of the symbols of a blind person’s ability to come and go on his own. Its use has promoted courtesy and opportunity for mobility of the blind on our streets and highways.” As part of the White Cane Safety Day in 200, United States President, Bill Clinton, said, “With proper training, people using the white cane can enjoy greater mobility and safety by determining the location of curbs, steps, uneven pavement, and other physical obstacles in their path. The white cane has given them the freedom to travel independently to their schools and workplaces and to participate more fully in the life of their communities. It reminds us that the only barriers against people with disabilities are discriminatory attitudes and practices that our society has too often placed in their way.”

In Canada, October 15 was officially adopted as White Cane Day by Resolution 2011-2 of the Canadian Federation of the Blind on November 12, 2011, in Victoria BC. It was subsequently first officially celebrated in Canada on October 15, 2012. It is, in the words of the Canadian Federation of the Blind, a “day to celebrate the long, white cane and blind people’s independence, empowerment and achievements through using it.  The day can also be used as a platform to involve media and bring to attention pertinent issues of the day that blind people are affected by.  The day can involve activities, such as a cane walk.”

At the Camp Bowen Society and the Pacific Training Centre for the Blind, we believe that equal access to the skills of blindness and Deafblindness, including independent travel with the long white cane, is crucial to the success of Canadians who are blind and Deafblind and we will continue to work hard to make these skills available to our fellow Canadians through our summer independence camps and our blindness/Deafblindness skilsl training programs.